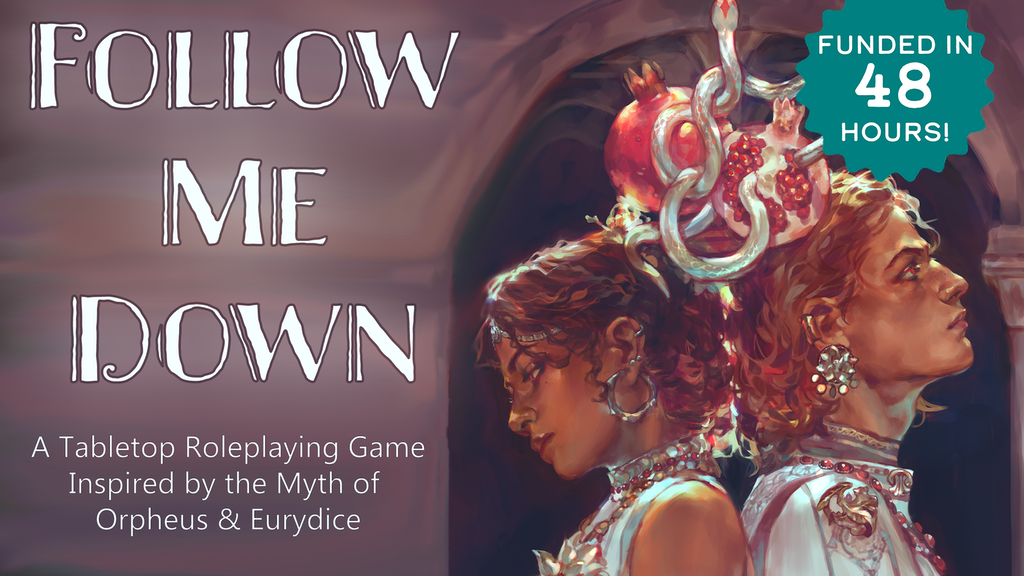 Hi, everyone! The shipment of hardback copies of Follow Me Down has finally arrived. As previously mentioned I will be out of the office from January 30th - February 15th, so I will not be shipping books until after I return (the reason for this is that I could probably only get about a quarter of the books shipped before I leave, and splitting the shipment like that could cause a lot of logistical problems).

That said, you have until February 15th to make sure your details are correct in Backerkit, so your rewards ship to the correct address. On February 15th, I'll be locking addresses and you will no longer be able to make any changes. Please don't wait until the last minute to do this! I will not be available to answer questions after I leave on January 30th until I return.

That's all for now! I'll check back in right before rewards begin shipping with a more detailed shipping schedule.

Hi everyone! Bound proofs for Follow Me Down have arrived. Over the next day or two, I'll give the book a final read-through to make sure everything looks as expected, then give the printer the go-ahead to ship the pallet with the rest of the order.

It's more likely the shipment with the rest of the books will arrive the week of January 23rd, instead of our initial estimation of January 17th, however, so our distribution schedule requires a bit of adjustment. I will be out of the office from January 30th - February 15th, so I won't be able to ship books to backers until mid-February, after I return. That said, the end is in sight, and I should be able to have all physical rewards, including dice and canvas prints, shipped by the end of February.

So, please just sit tight for another couple of weeks, and you'll soon have the book in your hands! I'll check back in again, once the books arrive from the printer, and let you know if there are any further alterations to the schedule. Once rewards have shipped, we'll work on finishing up Tomes of the Dead and any remaining stretch goals.

Once again, thank you for your patience, and I can't wait to show you what we've created!

Hi everyone! I wanted to let you know that I've received a tentative shipping date from our printer, and I wanted to pass on the good news to you. As expected, books will be arriving in mid-January; specifically January 17th! Shipping to backers will begin immediately after the books arrive, starting with book-only and retail backers, then moving on to deluxe backers (and those with physical add-ons), and finishing up with international backers.

Based on the estimated arrival date, I hope to have all rewards shipped by the end of January. As always, I will continue to keep you updated if there are any changes or new information. I hope you all have a wonderful holiday season and a very happy new year!

Hi everyone, this is not a huge update, but I wanted to let you know I've received the hard proofs from the printer and am in the process of approving them. There are very few changes that need to be made, so Follow Me Down should be going into print production next week, after the holiday (American Thanksgiving).

I also wanted to mention some of the health struggles I'm currently facing. You may remember that, in early October, I had a stent placed in my left kidney because it wasn't draining properly. Things were fine up until last week, when I had what I thought was an infection. I had an emergency appointment with my urologist today and learned that I don't have an infection, but my kidney (and possibly liver) aren't functioning correctly. Whatever is causing this problem is very inconvenient and painful, so it's been difficult to get much done. I've been scheduled for more tests to figure out what's wrong, and my urologist put me on a drug that will hopefully help with the pain, but I won't be terribly useful while we sort this all out.

The good news is that my health issues are unlikely to effect progress on Follow Me Down. The files for the physical book are already with the printer and don't require much tweaking, so I'm mostly waiting on them to finish printing. All the dice and canvas prints have arrived, so we're still on track to have physical rewards ship in January. I'll let you know if anything changes between now and then, but I wanted to keep you informed for the sake of transparency.

That's all for now. As always, thank you for your continued support!

Hi everyone! You should have just received a notification that the PDF of Follow Me Down is available for download via Backerkit. Simply use the link in the email to log into Backerkit, download the file and enjoy!

I did want to note that, at 84 pages, the game is a bit shorter than originally estimated. The first draft of the game sat at 93 pages at the time this campaign launched, and I assumed adding more art would make it longer. That ended up not being the case for several reasons. Some of the modifications to make the book more readable for people with disabilities, such as font choice and doing away with the typical two-column structure, made the book more streamlined. Also, a majority of the feedback we got during playtesting was about making the Books of the Dead chapters easier to parse, so players weren't spending an inordinate amount of time reading when it was their turn to play the Fates. Adapting those sections for ease of play also made the game more streamlined. I still love what we've created, however, and I hope you do too!

As of this update, the game is done (obviously), and files have been sent to the printer. We're working with a US-based printing service, which means we won't have to worry about shipping the books from overseas, but the approximate timeline the printer has given us for the books is between 6 and 8 weeks. There are a lot of factors that go into this, from paper shortages, to scheduling around holidays, to this simply being a busy time of the year for our printer. Based on this estimate, plus necessary things like proofs and shipping from the printer, means we probably won't be able to ship physical rewards before the end of the year.

I know this is kind of a bummer, but the entire month of January will be dedicated to sending out physical rewards, so you shouldn't have to wait too much longer. We already have the dice and canvas prints for the Deluxe rewards, so the only thing we're really waiting on right now is the books.

Tomes of the Dead & Stretch Goals

I mentioned in a previous update that the rest of the work on Tomes of the Dead and digital stretch goals have been pushed to the new year. This is because we're concentrating on physical rewards first, and because this schedule works out better for everyone working on the project. I will give you a more solid deadline once things have calmed down, but my best estimate is that Tomes and most stretch goals will be done and ready to distribute sometime in March.

That's all the news for now, and I'm looking forward to hearing about what you think of the book! A lot of people worked really hard on this project and we're all pretty proud of what we've created. Thank you once again for your support and enthusiasm, and I hope you love Follow Me Down just as much as we do!